Repost: Among Forensic Pathologists, Quincy’s a Social Crusader Striving for professional, scientific accuracy, it occasionally appears that the good doctor is too good

A rape victim is brought in to the emergency room of a mid-west hospital. A nurse notices that among the victim’s injuries are bite marks. The nurse demands that a photographer record the marks and later, when the rapist is apprehended, those bite marks form a significant part of the evidence that brings about his conviction. It is the first time in this jurisdiction that such evidence has been used. But the nurse knew that it could be used; she had seen it used – on TV.

The show that helped lead to the rapist’s conviction is Quincy, a weekly one-hour series on NBC in which a volatile, socially-conscious medical examiner, played by veteran actor Jack Klugman uses forensic pathology to solve crimes and right social wrongs.

The bite-mark conviction was not exactly life imitating art; it was more a case of life imitating art imitating life. The Quincy episode was drawn from an actual case worked on at the Los Angeles Medical Examiner’s laboratory, where the real bit marks came under scrutiny of a young scientist working for the M.E. He is no longer there, however; Marc Scott Taylor now has a full-time career as Quincy’s technical adviser. His function is to make sure that regardless of the convolutions of the plot – including some that occasionally stretch credulity- the show retains scientific and medical authenticity. So far, except for an occasional lapse, he seems to be succeeding.

Taylor has been keeping Quincy on the scientific straight-and-narrow almost from the show’s inception in 1976. He already was steeped in forensic esoterica, armed with degrees in zoology and cellular biology and a talent for working with some of the more complex gear found in well-equipped pathology laboratories, especially the electron microscope. “We handled every case where there wasn’t a routine procedure,” he recalls. “We’d get bite-marks cases, certain tool marks in dismemberment,” and other equally grizzly, but no less challenging problems. “I was working at that job when the first production people on Quincy came around to see what a coroner’s office looked like,” he told Science Digest. He offered his help, which was eagerly accepted, and a year later, he went to work for Quincy as full- time technical adviser.

“The writers come up with a scene,” he explains, “and then bring a technical adviser on to the set and say, ‘Okay, make this scene do what it’s supposed to do.'” But that is not always possible, so in Quincy, where medicine and science are integral to the plot rather than peripheral to it, the technical adviser often gets involved in rewriting scripts.

“One writer needed a way to kill a guy,” he said, “but it had to happen some distance from where the victim’s wife actually gave him the substance. We decided to give the character a penicillin allergy. We could then micro-encapsulate penicillin in protein coats, so it resembles a powder. We give him this stuff in the morning, it dissolves 12 hours later, and the fellow goes into anaphylactic reaction and dies.”

Taylor tends to leave the area of forensic pathology to the show’s other-part-time-technical adviser, Dr. Victor Rosen, chief surgical pathologist at Brotmas Memorial Hospital in Culver City. “Some of the cleverest ways of killing people have come from Vic,” Taylor says with an admiring smile. When scientific research for a particular episode requires outside expertise, Taylor seeks it eagerly. “In many ways,” he says, “I fill the role of liaison between Universal Studios (where Quincy is produced) and the technological community.” Still, occasional slip- ups occur.

One show, for example, the plot involved a victim being given a fatal does of a rapidly acting drug, and then wandering about the corridors of a hospital before keeling over. Unfortunately, “someone” neglected to heed Taylor’s admonition that, in addition to being fatal, the drug causes instantaneous and total paralysis, obviating corridor-wandering.

Still, medical and scientific accuracy are in such evidence that the show has received numerous awards and laudatory comments from professionals. “We depict procedures which aren’t yet in use in most laboratories,” Taylor contends. He cites video superimposition, a procedure in which a skull and an X ray are projected simultaneously, to make possible identifications of the skull’s original owner. On the day of our interview, Taylor apologized for being late: He had been occupied at the laboratory of a computer expert who has developed a method of reconstructing automobile accidents by means of computer graphics. Two weeks later, the technique appeared in a Quincy episode.

“Quincy strives for an ideal which we feel is the best you could ask for in forensic medicine …” Taylor says. And that “ideal” doesn’t stop at the laboratory’s appurtenances. “When we get into the various lab procedures, ” he relates, “we try as much as possible to do real procedures, or at least a portion of real procedures… If Jack Klugman is working on an autopsy and he needs to pick up a liver, we’ll get him something approximately the size and weight of a liver – maybe a kidney – so he actually has something to work with that he can slice into…” He hastens to add that the kidney comes from a local butcher shop.

Klugman has visited the Los Angeles coroner’s office on several occasions to witness autopsies, inspect wounds and get a general feeling of the work and atmosphere in a forensic laboratory. And Taylor has joined the Screen Actors Guild so that he can operate some of the more complex equipment on camera, rather than have an actor do so incorrectly. (Look for the mustachioed “Mark” with a k – when you watch the program.)

Taylor’s work is not without social implications and responsibilities. Among the fan letters are inquiries from pathologists and other scientists about new procedures that are presented, “We did a show using DMSO [dimethyl sulfoxide] to promote absorption of snake venom into other skin. We mentioned the research that had been done to use this as an alternative to injection, particularly when dealing with hemophiliacs or people sensitive to injection. I had a lot of requests on that, including quite a few that I had to handle tactfully, because frankly,” he admits with a nervous laugh, “I didn’t know what their motivation was for asking.” Promotes Murders?

Does he ever worry about actually instructing people in the commission of murder? “Yes,” he concedes, ” I sure do. But I like to think that as many investigators are watching the show as potential criminals… Still, when we write the shows, I will put in some things that make it more difficult for the layman. For example, with the DMSO, I specifically wrote in that the snake venom was fractionated [i.e., separated into its various chemical components]… This made it a sufficiently complicated procedure so that it would take a biochemist to do it. When ever we come up with too good a means of killing somebody that would be difficult to detect, we try to have a specialist doing it.”

But the show’s social responsibility hardly ends with thwarting would-be murderers. Among the issues that the series has addressed are disreputable plastic surgeons, proper treatment of autistic children, mistreatment of the aged, unqualified coroners, inadequate laboratory investigation in rape cases, the free availability of deadly colchicine for marijuana users who like to grow their own, and a host of other problems involving bureaucracy, the medical establishment, and inadequate protection of an unsuspecting public against a seemingly endless array of fools and charlatans.

Dr. Quincy is a crusader. “The Quincy character,” Taylor claims, “is Jack Klugman, and what Quincy goes after – the demands he makes on society, on people, and on behalf of what he feels is just – is a reflection of the actor and what he feels is right.” As a result, Dr. quincy has evoked some criticism from his real-life counterparts.

In a survey of M.E.’s made by Lab World, a professional journal, Dr. Michael Luongo, Boston’s M.E., commented: “In real life, the coroner does not take sides… He is supposed to gather information and not be concerned with ‘whodun-it.’ The coroner is equally responsible to the district attorney, defendant, prosecutor, corpse and family. He does not get involved with what happened.”

But Dr. Luongo adds that he does “like the show [because] the series is a positive impression of the life of a medical examiner.” So much so, in fact, that it has caused an unexpected problem. In the same survey, Dr. Ronald Wright, deputy chief M.E. for Dade County, Florida, notes: “There is a shortage of forensic pathologists and the salaries for those working are unreasonably high. Quincy has encouraged many communities to want their own forensic pathologists and there are not enough to go around, even if the price is right.”

In general, then, it would seem that Quincy’s professional critics are complaining that the good doctor is too good. None, however, has complained that he is unprofessional, at least from a scientific point of view. And to those who may object to the mixture-in what is essentially an entertainment medium – of social consciousness and hard science, Jack Klugman and Marc Scott Taylor have a ready response.

They simply mention a rape victim in the Midwest who came into a hospital emergency room with bite marks on her body. 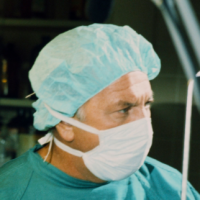