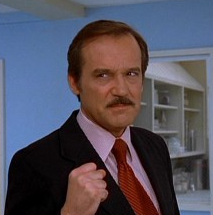 On the Cover: John S. Ragin, who plays Jack Klugman’s boss, Dr. Robert Astin, in “Quincy,” has been keeping good company during his acting career.

At Carnegie-Mellon University, Pittsburgh, he studied drama with such people as Sada (“Family”) Thompson, George Peppard and Barbara Feldon. Klugman was there at another time. But that coincidence has nothing to do with his getting the series.

During four years of Shakespeare at the Stratford, Conn., festival, he played Octavius in “Antony and Cleopatra” with Katherine Hepburn and Robert Ryan, among other credits. In Los Angles, he played “The Crucible” with Charlton Heston.

AFTER CARNEGIE-MELLON, Ragin spent a year in England on a Fulbright scholarship. It was his second invitation. “It was great being in London, but I think I would rather have been in New York because I had all the formal training,” he said.

Ragin was no Hollywood newcomer to the theater when he landed the role “Quincy.” He plays the administrator and deputy coroner for the Los Angeles coroner’s office. Klugman’s Quincy is one of his medical examiners.

Ragin got to Hollywood 16 years ago. Money drove him West. He was making Army films in New York for $60 a day. “If I was going to get up at 6 o’clock in the morning to do Army films, I might as well come out here for supposedly the big money, ” he reasoned during an LA interview.

Remember Glynnis O’Connor’s brief “Sons and Daughters” series? Ragin played her father. “It was a real shock. Somehow I thought, with my ego, that it was about the kids. I lost all hope. I found myself trapped and couldn’t do anything else.”

HIS GUEST ROLES before “Quincy” included, among others, “Storefront Lawyers,” “Switch,” “McCloud” and “Alias Smith & Jones.” He had a small role as a policeman of the first TV films about school riots, “The Whole World is Watching,” as an FBI agent.

Ragin was fond of working with Eddie Albert and Robert Wagner in the 1975 series “Switch.” He played a Universal Studios executives with humor. “I usually don’t play comedy. Albert and Wagner ad-libbed the rehearsal and on camera. I heard the dailies were wonderful. It was like I was on stage. It was terrific.”

He thought he got the “Quincy” role when executive producer Glen Larson saw him sporting a mustache in the Universal Studios’ restaurant. He still remembers “the terrible hamburger” but it was well worth it. The mustache came about four years ago when Ragin heard one casting director describe his face as “very bland.” “For a long time, they didn’t know how to type me. Glasses made me a bookkeeper or lawyer. I was never the heavy or the guy next door.”

THE FIRST DAY on the “Quincy” set was also memorable to Ragin. “You lying bureaucrat!” Klugman yelled at the first sight of Ragin. His immediate reaction was to yell back, a reaction brought on by his withdrawal from cigarettes.

“It was great fun and it has always been since,” Ragin said. He called those TV exchanges with Klugman “marvelous little sparring matches.” He loves the role of Astin because he doesn’t have to be a cool operative.

“It’s been a joy since. I don’t feel I’ve repeated a scene. Every scene you do with Klugman is like a stage show.” He liked being Quincy’s thorn. Astin began as a cut-out comedy type with little content, he felt.

“I played him broadly at the start but now he’s subtle. He had to get softer. There is a respect between the two. The conflict comes because of Astin’s responsibility for the entire department and Quincy’s concern for each case.”

RAGIN IS A champion for Klugman’s fights for better scripts and production. “It doesn’t bother me he’s so out-spoken about the show. He has allowed me to add information I have researched. He’s always asking to rearrange scenes so they play better. It’s a very creative experience.”

As a supporting player, Ragin works about three days a week, 7:30 a.m. to 7:30 p.m. “Sometimes I’ll work until 2:30 in the morning allowing guest stars to go home so they don’t have to pay them for another day.” On those other two days each week, Ragin rehearses and researches his dialogue and attempts to add information.